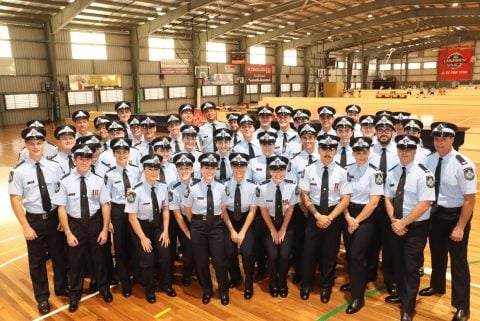 Forty-three new first year constables have officially been inducted to the Queensland Police Service, with most now heading to regional parts of the state.

Many of the new officers came from different careers as diverse as information technology, animal health, mechanics and skydiving.

The induction means the first-years will now commence rigorous "real-world training" at their new stations.

Most will be posted throughout the Far Northern, Northern and Central regions. Bundaberg will gain one new officer, based at the Bundaberg station.

Deputy Commissioner for Regional Queensland Paul Taylor says the new officers to embed themselves in the communities in which they are stationed.

"Working in regional areas allows for these officers to get a wide variety of experience in all types of police work, but also allows them to become one of the locals through community engagement opportunities outside of work," he says.

"As a QPS officer in regional Queensland, these FYCs will see the direct and very real impact their work has on the people in the communities in which they live."